Hello my lovelies! Yesterday I posted my favorite moments from Season One of Once Upon a Time and today I have for you my favorites from Season Two! So let’s get started shall we 😀

1) When Snow leapt after Emma- It’s episode one again and already I am crying…again. Seriously. From the moment two minutes in when Snow looked at her daughter with so much love and proclaimed “You found us!” to this, when she refuses to lose her child again, I’m pretty much curled up on the couch whimpering. THE LOVE!!! 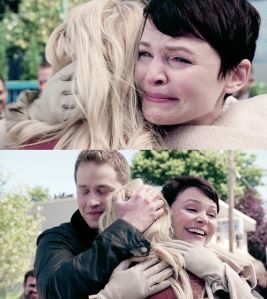 All Rights Belong To Artist.

2) When Regina let Daniel Go- She just wanted her true love to live… just maybe not in writhing pain as a Jekyll and Hyde type thing, but still…poor Regina. I know it broke her heart to let him go after all this time and to finally accept that they would never be together.

3) When Downton met Storybrooke- Mrs. Patmore is in Storybrooke! I probably got too excited by this, but my two favorite shows just merged together for one (heartbreaking) episode and I totally loved it ❤ (Maybe this is where Matthew and Sybil went after all… they’re not really dead, just cursed!)

4) When we met Snow’s mother- What are the odds that the same episode as the Downton-crossover there’s an equally awesome Bold and the Beautiful-crossover?! I mean how much awesomeness can this one episode contain? It took me about five seconds to figure out that the sweet, smiling Queen Eva was in fact, the scheming, nutty, and all around Queen of Soap Darkness Quinn Fuller! Personally I love Quinn, she’s just that crazy that she’s freaking great and now I know she can be a beacon of light and kindness… you know, if she wanted to 😉

5) When Belle was shot and fell over the town line- I pretty much screamed and fell off the couch here. I mean the whole time she and Rumple are hugging that line I was nervous and just as I went to say so out loud, the gunshot rang out and I freaked! THEY JUST FOUND ONE ANOTHER AFTER 28 YEARS (and however long she was locked away in that tower) AND NOW SHE HAS NO MEMORY OF HIM!!! AHHHHH!!!!! What the heck?!!! Yeah, the whole house pretty much erupted into righteous, freaked-out confusion here. It was a real The Shit Hath Hit-ith The Fan moment.  Not to mention we now had to deal with Lacey instead of Belle.

6) When Belle broke the teacup- I mean I know she just lost her memory, almost got run over by a car, got shot by a pissed-off pirate, and saw a strange but handsome man heal her with magic before throwing a ball of flames at someone, but still… There was no need to throw Chip at a hospital wall and small him into pieces. None. And it nearly broke Rumple’s heart. Just saying.

7) When Bae met Henry- I called Bae’s true identity and the fact that he was Henry’s father way earlier, so I was thrilled to watch as not only Emma and Bae (now known as Neal) found one another after ten years apart, but as Bae discovered he had a son and Henry learned the truth, that his dad was alive! I never blamed Emma for lying to Henry because all she knew was that his father got her sent to prison and abandoned her, but it was such a happy moment to see them thrown together again and know that soon the truth was going to come out. And you just know Bae is going to be one Helluva dad!

Clip From Google. All Rights Belong To Owner.

8) When Rumple called Belle on his deathbed- Rumple is dying and Belle still has no memory of him, but that doesn’t stop him from reaching out to her, his one true love, when he knows the end is near. That phone call is beautiful, heartfelt, gloriousness. She was his hero, she loved him, she made him want to be better, even in his last minutes he worried about Belle more than himself and wanted her to know who she really was, so she wouldn’t be afraid anymore. Please excuse me as I go cry in a corner somewhere…

9) When Emma had to go make tacos- I nearly peed on myself when Emma and Henry walked in on Snow and Charming “resting”. The horrified look on Emma’s face was perfect as was her declaration that she had to go make tacos (and try to sear the image out of her head)! As Charming said “It’s impressive that we can still provide her with a few traumatic childhood memories at this stage of the game.”

10) When Snow felt Regina’s pain- They have a complicated step-mother/daughter & bestie/enemy relationship but I love it. So when Snow linked herself to Regina so they could find her and then felt the torture Regina was enduring, it was just heartbreaking.  Come one ladies, put your differences aside and admit your best-friendship! Friends don’t let friends get tortured!

11) When Emma told Bae she loved him- I KNEW IT! I hated Bae’s fiancé Tamara (with good reason it turns out) and really like Hook flirting shamelessly with Emma, but I really wanted to see these two admit their true feelings for one another. I love Hook and Emma but I equally love Bae and Emma and really, these two just have something that needed to be acknowledged, whatever happens. All the pain of the past aside, there is real love here, and it took a heck of a lot for Emma to admit it. 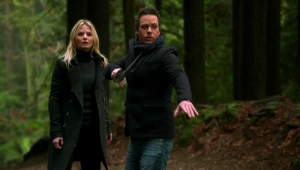 12) Hook!!!- Killian Jones aka Hook arrives on the scene and my mind nearly explodes. He is part dashing rouge and part unexpected hero wrapped up into one sexy, leather-clad pirate captain complete with wit, sarcasm, flirtatiousness, and smoldering looks that make one blush just watching the show. Seriously…I mean really, Emma has all the luck. 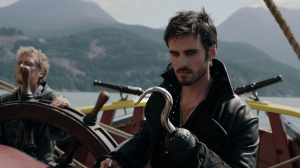 Oh, and I have to add this one in here because it can’t be left off (even though I forgot it momentarily)…

13) When Snow was “waking up”- She reentered her cursed sleep world to find a way for her and Emma to get back home to Charming and Henry and discovered that her husband had come to find her, but that meant falling under a sleeping curse himself! It nearly destroyed her to realize she was waking up and would have to leave him in that burning room of fire, alone and lost to her until she and Emma found a way back to Storybrooke and she broke his curse with true love’s kiss. The complete and utter despair in her voice as she said “I’m waking up,” broke my heart right along with hers and I had to remind myself that they will find one another… that they will always find one another!

Clip From Google. All Rights Belong To Owners.

So what do you think my lovelies, do you agree with my list? Did I leave any of your favorite moments out? Let me know in the comments! And don’t forget to check out my favorite Season One moments (the link’s at the top) and look out for my Season Three moments! Also check out my latest short story The Water Maiden and let me know what you think! 😀

4 thoughts on “Once Upon a Time Moments: Season Two”

Sometimes I Pretend I Have a Classics Degree.