Have y’all ever noticed that all the good movies hit the theaters at the same time? I’m pretty sure it’s a conspiracy of epic proportions, because we go through months or years of dry spells where there are literally only one or two good movies a year and then suddenly…HOLD ONTO YOUR WALLETS BECAUSE EVERY GOOD MOVIE THAT WE CAN IMAGINE IS COMING OUT AT THE SAME TIME! I mean seriously, they should plan this out a little better and spread out the awesomeness so that people aren’t so aware of the fact that they’re about to shell out a fortune to watch good entertainment. It seems that we’re now entering into one of these “good movie” spells that both excite us and bankrupt us at the same time because I’ve noticed there are a heck of a lot of good movies coming out in the next three or four months that I can’t wait to see. This leads me to my second blog list (squee, I love lists!):

Les Miserables– (December 25th 2012) I’m eagerly awaiting the Christmas season for more than just my annual visit from Santa this year folks! I can already hear the music keying up in the background (though that’s probably because I play my Les Mis playlist on youtube pretty much every day but that’s beside the point)! But seriously, I can’t wait to finally watch this in theaters and finally hear the new renditions of these timeless songs! 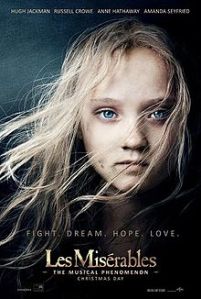 2) The Hobbit– (December 14th 2012) Do I even have to explain why I’m excited for this?! I think not, suffice it to say it’s more Lord of the Rings, the return of Gandalf, and the introduction of Richard Armitage (who captured my ardent interest after playing Mr. Thornton in BBC’s North and South. Check it out people!).

3) The Host– (March 29th 2013) Aliens freak me out but I absolutely love this book and I’m quite excited to see how it’s been translated it to film! The book emphasized both the glory and agony of human emotions through Wanderer’s (aka Wanda the soul/alien) interactions and relationships with her human host Melanie’s family, species, and boyfriend. I don’t want to give anything away for those who have not read the book or who plan on seeing the movie, but I will say this: read the book before you see the movie. The book is powerfully moving and no matter how good (or horrid) the movie is, it will never be all that the book is. 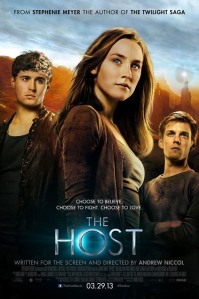 4) Beautiful Creatures– (February 13th 2013) I actually have my best friend to thank for this one, she sent me the link of the preview last Friday and now it’s driving me nuts because I want to read the books so badly! Not only did the trailer for this film grab my attention with its paranormal, romantic, southern-gothic content, but it also played Seven Devils by Florence and the Machine in the background and that just automatically makes it awesome. I now have three months to read the four books in this series before the movie comes out…hardly a challenge (except finding the money to buy all these books…oh Santa darling)!

5) Warm Bodies– (February 1st 2013) I saw the preview for this the other night and although zombies are not my normal thing, this movie looks rather interesting and I have to admit…I really really want to see it! I would never have thought to do a zombie romance movie/book/anything, but this looks so cute it’s not even funny. Check out the trailer on Imdb and let me know what y’all think!

6) Anna Karenina– (November 16th 2012) I love classics, and the Vivian Leigh version of this film was incredibly beautiful so I’m hoping that this movie doesn’t disappoint. I was completely enthused until I watched the trailer for the film and saw that it was a very artistic rendition of the book; it still looks rather good and I loved Moulin Rouge and over the top things like that so hopefully everything will turn out great and I will love this movie and it’s wacky, craziness!

7) Cloud Atlas-(October 26th 2012) This movie looks amazing, with its interconnected stories and flashbacks and romance and redemption. It’s so far up my alley that it’s practically next door to my house (metaphorically speaking of course, lol). I’ve had this philosophical gem of a movie pegged for a few months now, waiting for it to come out and now that it has I can’t wait to go see it!

See, what did I tell you?! So many good-looking movies coming out in such a short time span and these are only the movies coming out in the next three to four months! I also can’t wait to see World War Z (June), The Great Gatsby (May), The Hunger Games: Catching Fire (November), and The Mortal Instruments: City of Bones (August). What about y’all, any movies you can’t wait to see? Are there some on my list that look good, or maybe some that I’ve missed?

Now if you’ll excuse me, I need to start on another list…

This year’s gonna be a big one, so let’s start with the easiest thing: money…